Kaz and Oliver have been best friends since preschool, each of them has the other's back. Most likely to be voted as “class clown.” Kaz may be reckless and impulsive, but end of the day he’ll always put friendship first.

Kaz is a laid-back guy who, unlike Oliver, doesn't think before his actions. He is outgoing, fun to be around and brave. When Kaz first started working at Mighty Med, Horace wasn't as sure on hiring Kaz as he was for Oliver. However, with some mistakes along the way, he can be just as trustworthy and a great employee. His favorite superhero is Tecton and when he is brought to the hospital Kaz tries to fix him but accidentally leaves a hole in his stomach. He knew that it was all his fault that Tecton wasn't healing, Kaz can eventually admit to being wrong.

He is best friends with Oliver and have each others' back and when they argue they both learn to forgive each other because they wouldn't know what to do without one another.

In I, Normo, it is shown that Kaz can sometimes be selfish and not care about other people's feelings, but he can sincerely apologize to them without any hard feelings. In some aspects, Kaz can be jealous towards Oliver, especially when things are involved around his crush, Stefanie. Kaz has a problem with authority therefore he can't always make right decisions and he can be very competitive even about the smallest things like being taller than Oliver and being more competitive than him.

In the most serious of situations, Kaz becomes more rational and logical. When Skylar turned evil, Kaz would remind Oliver to move past his personal feelings for her, telling him that saving the world comes first, even if it means taking her down. Kaz is also willing to sacrifice himself for others which shows that he is growing as a person.

Kaz and Oliver are best friends and are always together. Kaz, however, sometimes gets them into trouble and Oliver gets mad at him for it. Sometimes Kaz can have some slight jealously towards Oliver and can't help but show it. in Pranks for Nothing they said they love each other, and Kaz said that Oliver is the best friend he could ever have. (Main Article: Kaziver)

Kaz pretended that Skylar was his girlfriend, but apologized to her after she found out. They've worked together to solve things, such as figuring out what had happen to Brain Matter. They don't fight much, but they have disagreements. They care about each other, and are both good friends with Oliver. Sometimes though, he gets upset when Oliver spends more time with Skylar. When Skylar turned evil, Kaz had no second thoughts at bringing her down, believing that doing so was necessary to save the world. (Main Article: Skaz)

Alan tries to get Kaz and Oliver fired. In turn, Kaz does not like Alan very much. However, there are times when the two can get along.

Gus is Kaz's friend who Kaz sometimes feels sorry for.

Kaz and Philip have never had much of a relationship, other than being co-workers. However, Philip claims that only the real Kaz would know how much his large head means to him. He also stated that he like Kaz personality. 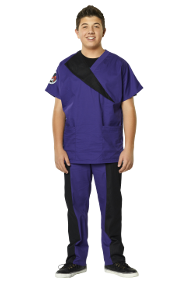 Retrieved from "https://mightymed.fandom.com/wiki/Kaz?oldid=44564"
Community content is available under CC-BY-SA unless otherwise noted.

Fandom may earn an affiliate commission on sales made from links on this page.

Fandom may earn an affiliate commission on sales made from links on this page.