Skylar Storm is a main character in the television series, Mighty Med. She is a comic book character that Kaz and Oliver like. Skylar Storm is not just an imaginary character, but a real person. Skylar is from the volcanic planet Caldera. It turns out that she is in the hospital because all of her powers have been taken away by the comic book villain, The Annihilator, making her a "Normo." However, she got her powers back, but fell under The Annihilator's control, becoming the secondary antagonist for the beginning of Season 2, and the main antagonist of Storm's End. She was eventually turned back to normal in that same episode, but her superhero status has since been revoked. She is now a main character in the Lab Rats and Mighty Med spin-off, Lab Rats: Elite Force. She's also an alien. In Lab Rats: Elite Force She got her powers back but has to remaster them because of repeated glitching.

Skylar has faced off with some of the most fearsome villains in the world. Beware to anyone who treats her as "just another pretty face!" However, she became a servant under The Annihilator's control, and became one of the world's most dangerous supervillains.

In the human world, her name is Connie Valentine, and she dresses as an average human teenage girl does, so she can hide her identity.

Skylar Storm is a comic book superhero who doesn't give up easily. She lost her powers because her arch-nemesis, The Annihilator, took them away from her. Even though she has lost her powers, she doesn't like to believe so. Once she tried to lift up a weight thinking that her powers would be restored but they weren't. She tried to burn a piece of bread, but that didn't work either, and she angrily threw it at the wall. Skylar sometimes helps Kaz and Oliver with their errands because she is bored without her powers. Skylar soon joined Logan High School since she realized that she isn't getting her powers back anytime soon. She wishes one day, she can regain her lost glory.

Sometimes Skylar gets angry when people don't listen to her or things don't go the way she wanted to, but she can be loyal and a good friend. Skylar is shown to care a lot about others, especially Oliver, and tries to do as much as she can do to help her friends. Skylar recently got her powers back, but her powers were corrupted by The Annihilator and now is under his control. With her serving the Annihilator, she has become a ruthless force to be reckoned with. She was also charming and cunning/manipulative to Kaz and Oliver.

Even when Skylar turned evil and accepted it, she still cared for her friends, not having it in her to destroy them. After being freed from the Annihilator's serum, Skylar has been guilt-ridden over the idea that she hurt and destroyed many people she cared about.

Regarding her physical appearance, Skyler donned a pink and black suit and blazer, and also had a pink streak in her hair. Her pink streak (as well as her nails) turned white as part of Skylar's heel persona during Season 2.

Skylar and Oliver are best friends. Oliver has promised Skylar that he would help her get her powers back and is still trying to figure it out. They are seen in many episodes helping each other out. Oliver has a crush on her. Oliver has gotten jealous several times of her hanging out with guys like Gus or Experion. While evil, Oliver is

usually the one Skylar targets for the Annihilator. They both admitted in their minds they love each other. She turned back good in Storm's End and their relationship is back on track. In the crossover with Lab Rats Bree shows interest in Oliver and Skylar gets jealous, stating she might like Oliver more than she realized. Even though Skylar denied it immediately, she may still have some feelings for him. In the spin-off/sequel series Lab Rats: Elite Force, Skylar told Oliver that she likes him too. (Main Article: Skoliver.)

Skylar is best friends with Kaz and has gone on a mission with him. They work together on many things, like figuring out what happened to Brain Matter. They care about each other, and they're both good friends with

Oliver. Kaz even used Skylar as his fake girlfriend and has technically proposed to her once. They're very opposite from each other, making them argue at times, do disagree on things. But they always look out for each other, despite their differences. Even while she was evil, she still thought of him as a friend. (Main Article: Skaz)

Alan and Skylar seem to be friends, but Skylar finds him annoying and obnoxious. He figured out a way to get her powers back temporarily, but there still hasn't been a permanent solution. In addition, Skylar doesn't mind seeing Alan humiliated every now and then.

Skylar was best friends with Experion back on her home planet, Caldera. But once she lost her powers and he came to earth, he started working with The Annihilator and then Megahertz. 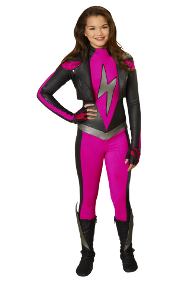 Retrieved from "https://mightymed.fandom.com/wiki/Skylar_Storm?oldid=45176"
Community content is available under CC-BY-SA unless otherwise noted.